This week I conducted a teaching exercise in my writing-intensive, first-year class about human health and the environment designed to help my students better understand how to analyze social “data” for their final papers. The “data” I chose were 3 blogs posts and 1 video describing what it’s like to live in a body that reacts frequently and unpredictably to the surrounding environment – a body with environmental illness. As promised, I want to share with you some of the insights my students came up with. They did a great job, putting their fingers on some of the major concerns I’ve heard voiced during my research on the food allergy community!

(I should also note that I asked and received permission to share a summary of the class from my students! Also, I’m paraphrasing slightly throughout, as I’m working from notes.)

First, here were the 4 pieces they read and watched:

A Day in the Life of Nickel Allergy by The Allergista
Environmental Illness – Not for the Faint of Heart by Kathryn Chastain Treat
Multiple Chemical Sensitivities – Being a Hairstylist with Environmental Illness by Dawn Marino at Tousled
The Woman Who’s Allergic to the World by Whitney Devin, via Narratively 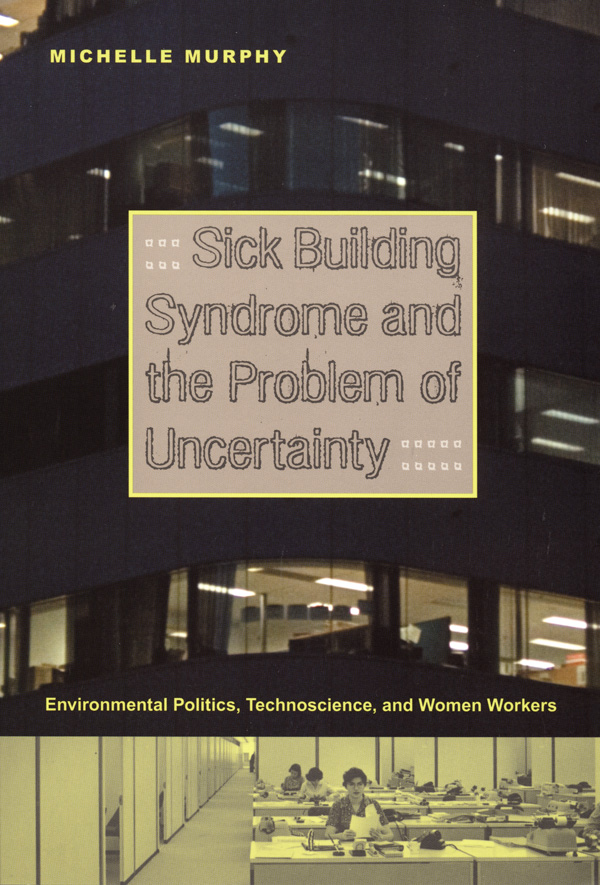 They had to read these during spring break. Right before spring break, they were primed to start thinking about allergic reactions to the environment. We read Michelle Murphy’s book Sick Building Syndrome, which describes how buildings became – and people learned to regard them as – “sick” in the 20th century. Her argument is that changes in building materials, the kind of work people do, and the tools that scientific experts had to detects the effects of toxic substances on the human body all conspired to make “sick building syndrome” possible. We also watched Todd Haynes’ film Safe, in which a young Julianna Moore plays a suburban mother who suddenly develops multiple chemical sensitivity. So they had some historical knowledge and an artistic rendering as context for encountering real, contemporary material.

They were asked to read and watch the material before coming to class. In class, they started by getting together in groups of 3 or 4 to just share impressions, observations, gut feelings, and patterns they noticed across the material. Then, I pushed them to think about what scholarly concepts we had encountered in the class that “fit” onto some of the patterns they identified. Next, I asked them to come up with an argument or thesis statement they might make about the materials based on their discussion – a 1-sentence statement of their most unique observation and what it revealed about the social dynamics of environmental illness. Finally, they came up with an outline of important points they would discuss if they were to write a research paper using about these materials.

I also want to note that below I often use the phrase “environmental illness.” This is what is called an “analyst’s category” in STS – it’s a category I use to simplify how I talk about certain groups of people. It’s not a commonly used category in medical science. In what follows, I use this term to encompass a variety of more specific diseases that may lead to reactions to substances in the environment, including sick building syndrome, multiple chemical sensitivity, allergies, and mast cell activation disorder. I have borrowed it from people who write about having such conditions, but at times I may use it in a different way than they would.

Here’s what my students came up with!

Group 1’s thesis was: “Complexity, a lack of a concrete definition, and a vagueness concerning triggers of reactions to the environment creates doubt concerning the legitimacy of the illness these people experience.” First, they noted that there were several different names that people used to describe similar experiences: allergy, multiple chemical sensitivity, and mast cell activation disorder came up across their material. They also noted that a specific name wasn’t used consistently to describe the main character’s illness in Safe; diagnostic instability in real-life resonated with diagnostic uncertainty in the movie.
There were several social effects of this diagnostic fragmentation, they argued. First, they imagined that it would be hard to unify people with different diagnoses, even though they might have similar experiences of reacting to the environment. In Sick Building Syndrome, Murphy talks about how women workers use informal surveys to document similarities among different sets of symptoms, priming my students for this critique. They also discussed the effect of multiple diagnostic categories on public awareness about the overarching category of environmentally-triggered illnesses. Without a unifying name, they argued, it will be difficult to raise awareness, people who are not sick will likely downplay the seriousness of being ill in this way. Moreover, perhaps this “weak” language is reinforced by the common cultural notion that women – the majority of sufferers of these conditions – are weak by nature, making it easy to ignore their complaints.

Group 2’s thesis was: “The social expectations for women to look a certain way and do certain activities increases their exposures; they also seem to be disproportionately affected by chemical sensitivities. What is the connection?” Their thesis came out of their observation that everyone affected by environmental illness in the real-world materials and almost everyone affected in Safe and Sick Building Syndrome were women. They could still massage the thesis some more for the purposes of my course, to make it more about social attitudes and significance than finding a causal biological connection. We are simply not doing the kind of scientific work that would allow them to make such arguments.
Nonetheless, they had an excellent set of observations about gender and environmental illness. First, of course, was the observation that most of the people we read about were women. There seems to be a gendered dimension to who reacts to substances in the environment. They posited that perhaps there is a causal connection between the amount of beauty products women use personally and in their workplaces and their symptoms; exposure to a wide variety of chemicals is socially necessary for women to be seen as “womanly.” They also noted an idea I introduced into their discussion: based on the social science literature, it seems that women are much more likely to come together to share their problems than men. Perhaps the overrepresentation of women is less about biological cause-and-effect and more about how women in particular manage their problems, especially health problems.

Group 3’s thesis was: “A lack of acknowledgement of environmental disease exacerbates symptoms. Therefore, people with such conditions try to establish it as a legitimate disease.” I think the second part of this is promising, and that’s what we focused on in class discussion.
Their idea grew from the observation that the blog posts they read were all trying to raise awareness about environmental illness in addition to telling personal stories about living with it. They theorized that because the general public has specific ideas about what it means to be “allergic” to something – they envision something like seasonal hayfever, not a chronic condition – it’s difficult for many to wrap their heads around the idea that someone can react to many substances that most people have no reaction to. It other words, while it’s “normal” to have seasonal pollen allergies, it’s “not normal” to react to cleaning supplies. The anxiety from facing constant disbelief – from doctors as well as from the general public – seems to exacerbate the illness experience.

Group 4’s thesis was: “Because the general public does not take multiple chemical sensitivity seriously, people with the condition experience alienation and negative physical and mental health impacts.” One example is the way that the main character’s husband in Safe doesn’t take her illness seriously; her character is clearly placed under additional stress by this as she tries to find treatment for her symptoms. In other materials, the group observed that environmental illness symptoms are sometimes assumed to be “just in her head.”
Similarly to Group 3, this group observed that conditions like multiple chemical sensitivity face a legitimacy problem. Their claims to legitimacy are further undermined by the complexity of modifying environments to keep them health. They noted that some of the blog post commenters commiserated about how their workplaces in particular failed to make accommodations for environmental illnesses. There was a sense that replacing the worker would be easier than reimagining the workplace even in small ways. This has a pernicious effect on the lives of such people (mostly women): they must choose between work and health. They additionally wondered if the fact that mainly women were affected undermined the credibility of their illness, too. If only some people are affected, they imagined critics asking, could it really be a real disease?
Group 4 did a great job connecting these observations to some historical research we read, too. They noted that in the 19th century, there was an understanding that different people could be affected differently – make sick or well – by the same environment. This idea was based on medical theories that are no longer seen as legitimate in the medical profession, specifically, the miasma theory of disease. However, they they wondered if the perspective that individuals can respond differently to the same environment might help spread understanding of environmental illnesses.

I hope you’ve enjoyed this! It’s a departure from my normal format. I hope it offers a window into the process of social science inquiry. These are, at a micro scale, the same steps I go through in my research: collecting data about individuals’ real-life experiences (through interviews, books, attending events, reading blogs and social media – and making notes and recordings of everything!), looking for patterns, seeking resonance between those patterns and other portrayals of and research on the same topic.
I’m so proud of this group of students! They’ve done an incredible job of learning to inhabit a disciplinary perspective very different from their own. Most of them are engineers who started the course assuming that numerical data about the world is the only legitimate way to understand the world. As you can see here, they’ve really broadened their perspective and started to think about gender, labor, power, uncertainty, and expert knowledge – analytic dimensions crucial to my fields of STS and medical anthropology. I can’t wait to see what they do with their actual final papers!